This is the final, and briefest, instalment of our food adventures in London.  Normal service will be resumed soon with some reviews of the finest Norwich has to offer plus some tasty recipes, our bathroom should be in place by the end of the week and we're hoping to be able to then get back to blogging more regularly.

So, day three in London began a little later; as our train was due to leave at 4.30pm we decided on an eating strategy of a hearty brunch followed by an early afternoon snack to tide us over until we got back to the fine city.  When we stay in London, we often stay in Angel as there are loads of excellent food and drink places nearby, one of which is the Islington branch of The Breakfast Club.  However, every time we've stayed our efforts to eat at The Breakfast Club have been thwarted by it being absolutely rammed, with queues out the door and round the corner.  Thankfully, there are several branches across London (plus one in Brighton) and one of them just happened to be a stone's throw from our hotel. 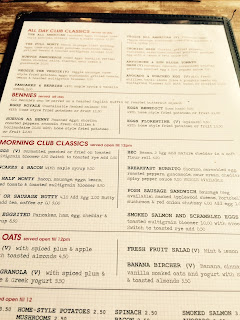 The Spitalfields branch is larger than the more bijou Angel café and this meant that we were able to get a table straight away.  It was busy, but arriving at around 11.30 - after the main breakfast crowd but before lunch has got going - meant that we wouldn't have to wait for our food.  The menu is a combination of traditional British and American/Mexican inspired dishes.  Think anything from a full English to pancake stacks to breakfast burritos and much more in between.  There's a good mix of original dishes and old favourites, something to please everyone. 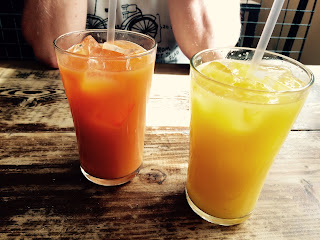 On the day we visited the hotplate had broken and so the menu choices were more limited, however that wasn't a problem for us as the dishes that took our fancy were still available anyway.  WOTVM went for the breakfast burrito - loaded with chorizo, scrambled egg, peppers and cheese with guacamole, sour cream and salsa on the side - whilst Mr Vegan Man opted for avocado and poached egg on toast, with the added zip of lemon juice, chillies, basil and some crunchy pumpkin seeds to boot.  To drink we ordered a freshly squeezed orange juice and a Slow Boy, which was a concoction of orange, carrot, apple and ginger. 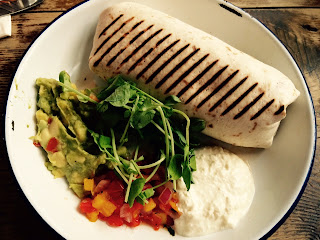 The drinks arrived quickly and were followed shortly afterwards by the food, which looked great.  WOTVM's burrito was really good; the scrambled eggs were light and fluffy, the chorizo was punchy with flavour but not overpowering, the guacamole and salsa went really well too.  Mr Vegan Man does make the best breakfast burrito in the world so The Breakfast Club had stiff competition, but this came pretty close in terms of flavour. Her only criticism was that there was a bit too much sour cream, a touch less and it would have been spot on. 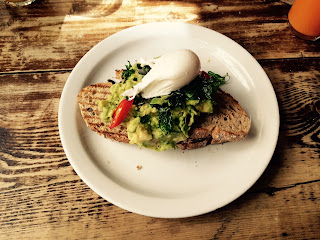 Mr Vegan Man's avocado and poached egg on toast was top notch.  The toast was good and crunchy, the poached egg had a lovely runny yolk, the avocado was creamy and complimented perfectly by a bit of chilli kick and the fresh pop of lemon and basil.  The seeds added some nice texture too.  All in all a very good brunch and at prices that are reasonable too.  Service was friendly and we'd definitely come back again. 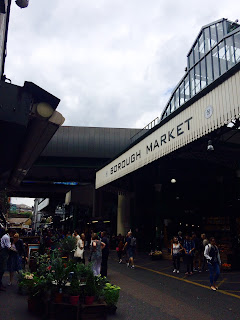 With a few hours to kill we decided to go for a stroll along the South Bank, starting off at London Bridge.  We walked up to the Tate Modern to see if there was anything we fancied seeing but after a quick browse around the free galleries the only thing we were interested in - an exhibition by Georgia O'Keefe - was prohibitively expensive, so we instead decided to head back along the river to Borough Market.

We love Borough Market, it has such a great variety of food stalls, with most of the world represented somewhere or other.  We've had great street food from there previously, including take away flutes of prosecco and pink fizz, but on this early afternoon we had a hankering for some gelato and so we ended up in Gelateria 3Bis.  The place looked authentic, with the gelato kept covered (we learnt in Italy that all authentic gelaterias keep the gelato covered, the more 'touristy' places pile it high and make it look flashy) and with a small but interesting selection of flavours.  Mr Vegan Man went for dark chocolate and coconut - going for the effect of a Bounty - whilst WOTVM chose peanut and banana flavours.  Unbeknownst to WOTVM, the banana variety was actually a sorbet rather than a gelato, however the banana flavour was really strong.  WOTVM was a little disappointed as she loves gelato and isn't a huge sorbet fan but she could appreciate the quality and ate it all. 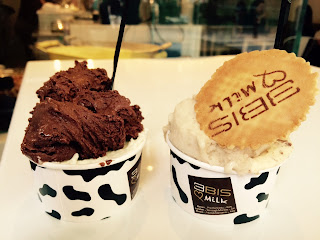 The peanut flavour was excellent, really good nutty flavour and a nice smooth gelato.  Mr Vegan Man's gelato was similarly really well made, beautifully creamy and with a good, rich flavour.  We both plumped for the free chocolate sauce in the bottom of our cups, which is a really nice touch and something that we also experienced in a gelateria we visited in Rome.  The sauce tastes like melted Nutella, which really can't be a bad thing.  We'd happily visit again, but WOTVM would make sure she ordered two scoops of gelato next time. 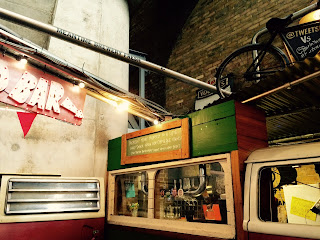 On our way back to the bus stop, we decided to stop for a quick drink at the Wheatsheaf right by the market.  It was a cracking little pub, with a brilliant outdoor area where we sat and enjoyed a pint.  Prices were a bit steep, but it is right by the market and it does serve really good local craft beer. 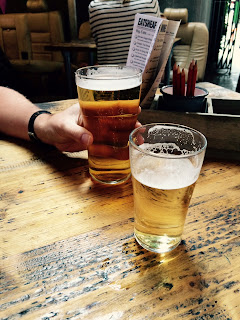 We made our way back to the hotel to collect our bags - via a quick vintage dress purchase on the corner of Brick Lane - and then we were on our way back to Norwich.  We had a great stay and ate lots of tasty food and we'll be looking forward to our next trip to the capital.
Posted by Wife of the Vegan Man at 09:16

So, to clear up a couple of inaccuracies relating to the blog title:


1) There are two of us.
2) We are not married so technically neither of us is a wife.
3) Neither of us are vegan (one of us is, however, a vegetarian that doesn't like cheese).


The name comes from a holiday we went on in 2014 when we visited Rome, Pisa, Florence and Venice. In Rome there was an amazing takeaway pizzeria that happened to serve a 'vegano' pizza - perfect for a cheese-phobic veggie. When the meaty, cheesy concoction arrived the man behind the counter announced that it was for "the wife of the vegan man" - much to everyone's amusement - and, unbeknownst to us at the time, our blog title was born.


Despite our opposing views on the virtues of meat and cheese, we do share a love for all things food-related. We both love to cook, we love eating out and we love to share our passion for food with others. We want to use this blog to share some recipes and tips, as well as attempting reviews of our favourite eateries in our home city of Norwich and further afield.