We recently spent three days down in London; we love going to London to stroll around and take in the atmosphere and it cannot be denied that our capital has one of the best food scenes in the world.  There is great food, of all kinds, to be found and we thought we would share our experiences with you in a three part blog, one for each day of our stay.

Day one in London began at lunchtime as we waited to check into our hotel on Brick Lane.  We decided to grab some Mexican street food from Chilango by Spitalfields Market.  Chilango are a small but successful expanding London chain and they offer a range of fresh and tasty Mexican classics, such as burritos and nachos, but the menu basically boils down to choosing your meat/veg option and then deciding on the accompaniments. 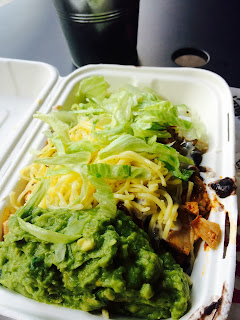 WOTVM opted for a Nudo, this consisted of a rice box topped with your choice of meat/veg (she chose chicken), black beans, salsa (mild, medium or hot), cheese, sour cream, salad and guacamole (for an additional £1.30). You are asked what toppings you would like as the dish is assembled in front of you so it's entirely your choice. WOTVM has visited Chilango a few times before and was keen to come back for good reason - the chicken was charred, juicy and full of flavour and the accompanying salad, cheese and beans combined to become a tasty and filling lunch. She opted for the extra guacamole and was pleased to see it was a generous portion, zesty and creamy and well worth the additional charge. 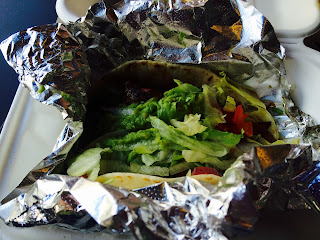 Mr Vegan Man opted for tacos - not the crispy, slightly dry shells you buy from the supermarket, but fresh mini tortillas individually filled with your choice of toppings to give you a hand-sized snack.  The portion size was very generous, each tortilla was filled to bursting with grilled peppers, black beans, salsa and guacamole.  Mr Vegan Man was pleased to be able to dodge the cheese and sour cream and found the flavours in the tacos to be fresh and zingy, with a nice rich smokiness from the black beans too.  The hot salsa had a nice kick but was not too fiery, but with additional hot sauce stationed at the table it's possible to give your lunch a bit more pep.  The habanero sauce was great, peppery and full of spice.

During the afternoon we took a trip to Greenwich on the river bus, partly because it was sunny and Greenwich is lovely in the sunshine, and partly in the hope of finding some delicious gelato at Black Vanilla.  WOTVM has been there previously but, alas, it appears to have closed down.  If anyone knows if this is permanent or whether they have moved to alternative premises, please do let us know. 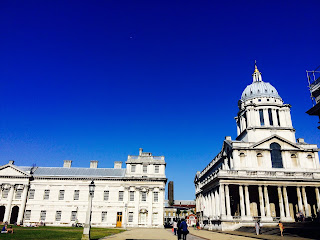 Having anticipated that our lunch would be reasonably light, the generous helpings on offer at Chilango ended up leaving us feeling suitably full until almost 9pm.  However, being on Brick Lane we were close to a number of restaurants.  Although Brick Lane is traditionally known for its Indian cuisine, many Londoners will tell you that the fare on offer is fairly standard and not much to write home about.  Just a ten minute walk from Brick Lane, though, is Dishoom in Shoreditch.  Dishoom have three branches across the capital, all of them being a take on Iranian-inspired Bombay cafes.  The food, then, is Indian but with a Persian influence, very far removed from your run of the mill Indian restaurant.  We have been here for breakfast on a previous trip to London and it was superb - the bottomless chai was a particular highlight - so we decided to give it a try for an evening meal.

You cannot book a table at Dishoom and even though it was fairly late when we turned up there were no tables available. We were given a pager and wandered off to have a pre-dinner drink in a pub around the corner with the promise of a table within 30 mins. Sure enough the buzzer went in around 20 minutes so we downed our drinks and headed back. After our unintentionally large lunch and not wanting to over-order, WOTVM asked our waiter for guidance on what would be a good amount of food for two to share and he was happy to help us out. The menu is split into salads, small plates, mains and sides. We decided it would be easier to share all our dishes (the tables seem to be set up with this in mind with two plates stacked on the table rather than formal individual place settings) and WOTVM was happy to forgo some chicken to be tempted by tikka marinated paneer. In addition to the paneer we went for the black house dahl, kachumber, chole bhatura - which was served with a puri bread - and basmati rice. 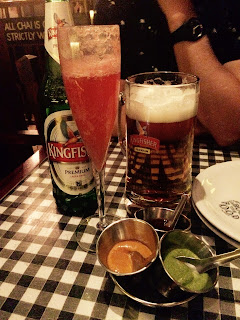 Our drinks, a large Kingfisher and a Bollybellini, arrived quickly and the food followed shortly afterwards.  The Bollybellini was quite a treat, beautifully flavoured with rose, raspberries, lychees and cardamom. 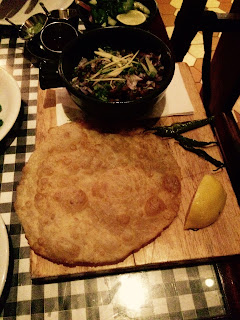 The chole bhatura, a chickpea curry, had a real depth of flavour and was excellently spiced.  The background heat was not overpowering but built up layers of warmth in the mouth the more we ate; the spicing definitely leant more towards aromatic as opposed to outright hot, with the fresh ginger on top adding a real pop of flavour and a nice kick.  There was a further garnish of whole chilli peppers, which packed a cracking punch if eaten on their own, but when dispersed through the dish they added an extra layer of heat.  The dish was not at all oily and despite the deep flavours it did not feel especially heavy, which was perfect given how full we both felt.  Mr Vegan Man has eaten many vegetable curry dishes and this was up there with the very best and we both agreed it was the standout dish. 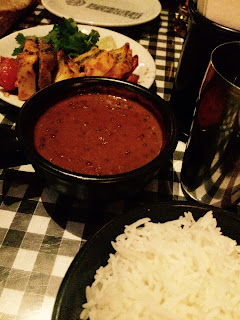 The dhal was completely unique; it had a slightly masala type quality to it, with a hint of smokiness.  Really tasty! 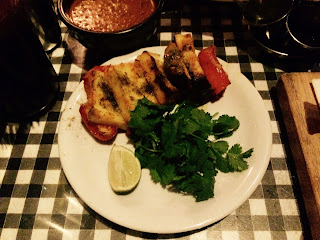 The paneer was lightly spiced and nicely grilled to add a very light crispness to the outside.  It came with grilled peppers which added a sweetness and crunch alongside the mild, chewy paneer.  It worked really well with the more richly flavoured dhal and chickpeas.  The puri was beautifully crispy and an excellent vehicle for the chole bhatura and black dhal, whilst the rice was light and fluffy and perfectly cooked. 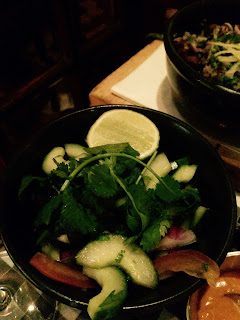 The kachumber - a salad of cucumber tomato and onion - was really fresh and added a cooling, cleansing dimension to the meal.  A selection of chutneys was also provided and each of these was delicious.  The green coriander relish was particularly good, although the smooth mango chutney, with a hint of almost piccalilli flavour, was great too.  The bhaji sauce - it must have a proper name, but this is what we call it - was sweet and worked nicely with the other sauces. 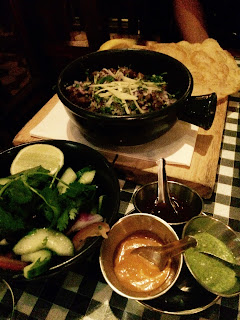 Dishoom, it must be said, are nailing it in every way.  The food is very different and incredibly tasty, with a menu that is great for vegetarians and perfect for sharing.  It is always busy so has a great buzz, but despite being busy the service felt personal and friendly, with the waiters more than happy to offer any suggestions or explanations relating to the menu.  The décor is quirky and fun with a touch of faded opulence to recreate the heyday of the Bombay café.  It takes confidence as a restaurant to not take bookings (other than for tables of 6 or over), but Dishoom have every reason to be confident when they are turning out quality food quickly and with great service.  And at £50 for food, drinks and service, it is very reasonably-priced too.

If you are visiting London make sure you drop in to Dishoom at any time of day - they are open from breakfast through to late evening - and you will not be disappointed.  For more info, including the menu, visit their website here.

Part two of our London adventures will be coming later this week!
Posted by Wife of the Vegan Man at 00:23

So, to clear up a couple of inaccuracies relating to the blog title:


1) There are two of us.
2) We are not married so technically neither of us is a wife.
3) Neither of us are vegan (one of us is, however, a vegetarian that doesn't like cheese).


The name comes from a holiday we went on in 2014 when we visited Rome, Pisa, Florence and Venice. In Rome there was an amazing takeaway pizzeria that happened to serve a 'vegano' pizza - perfect for a cheese-phobic veggie. When the meaty, cheesy concoction arrived the man behind the counter announced that it was for "the wife of the vegan man" - much to everyone's amusement - and, unbeknownst to us at the time, our blog title was born.


Despite our opposing views on the virtues of meat and cheese, we do share a love for all things food-related. We both love to cook, we love eating out and we love to share our passion for food with others. We want to use this blog to share some recipes and tips, as well as attempting reviews of our favourite eateries in our home city of Norwich and further afield.